Mushroom hunting is a favorite past-time for Czechs.   It is said that 7 in 10 Czechs go for some mushroom hunting between the months of July and November.

In keeping up with tradition, we had the opportunity of introducing Jakub to his first mushroom hunting activity this past weekend.

Dressed in our mushroom picking garb, we headed out to the woods close to Konarovice, a village close to Kolin.

Our first mushroom find got Jakub very excited.  Although he didn’t fully understand what a mushroom is, he was excited with the thought of looking for something and eventually finding it.

It was hard to explain that not all mushrooms are edible.

It became even more challenging when he started to pick out moss that was shaped like a mushroom.

I, on the other hand, had a hard time distinguishing the edible from the inedible ones since I am always more attracted to the colorful ones.  Most of the time, they are either poisonous or inedible.

This year, we were not very lucky, because we didn’t follow one basic rule:  wake up with the sun. 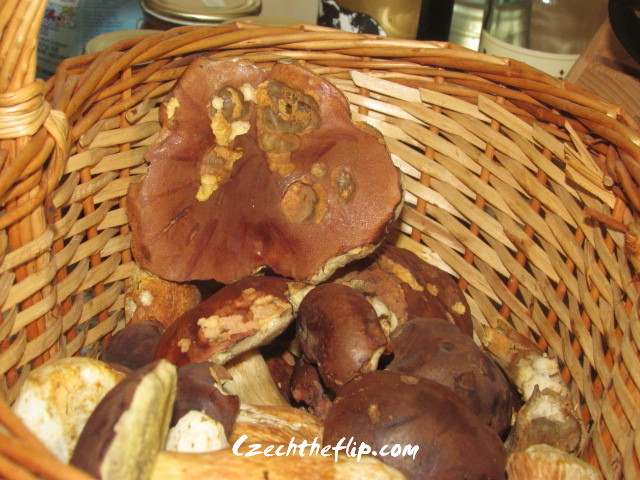 When we got to the woods, a lot of people were already there before us.

But the whole activity in itself proved to be very worthwhile.  I found more enjoyment in communing with nature rather than picking the mushrooms.  I also enjoyed seeing my son seriously in the prowl for those precious goodies.

After finally admitting that there were no more to be found,  we found a precious spot were we rested and basked ourselves in the warm sun.

Our son on the otherhand, got busy pretending that he was drilling something in the trees.

It was such an awesome experience — one that we will definitely do over and over again.

Have you ever picked mushrooms in the woods?